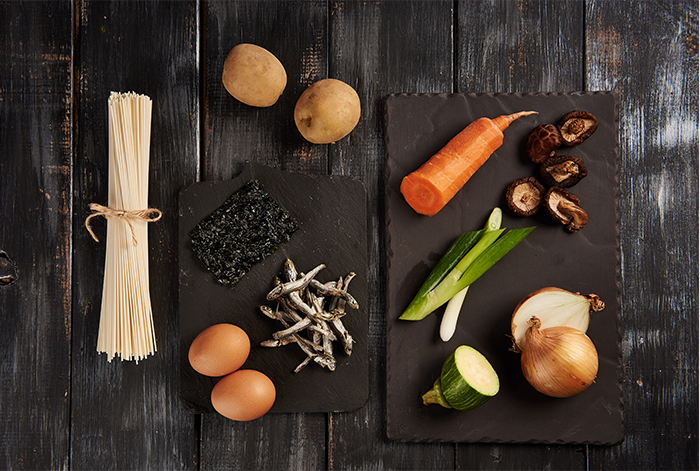 Rice is the chief grain in Korea, used with almost every meal, in porridges, rice cakes and desserts. Wheat flour is used in making noodles and served at feasts. Barley is used in bibimbap-style dishes and in various processed foods with wheat. Buckwheat flour is used for noodles, dumplings, jelly and cookies. Foxtail millet, Chinese millet, and African millet are also used in cooking rice, porridges, cakes and cookies.

Beans are used extensively in Korean cooking; in particular soybeans, red beans, mung beans and peas. Beans are used with rice to create cakes, steamed food or porridges, sprouted for use in banchan (side dishes) and bibimbap and also as ingredients for fermented foods such as soy sauce and soybean paste.

Potatoes and sweet potatoes may be substituted for rice and are used in cakes and fried food. They are also used to produce starch flour and other processed products.

There are various vegetables grown throughout the seasons. They are used as ingredients in soup, kimchi, salad, namul (wild greens) and pickled vegetables, which are an important source of vitamins, minerals and fiber. 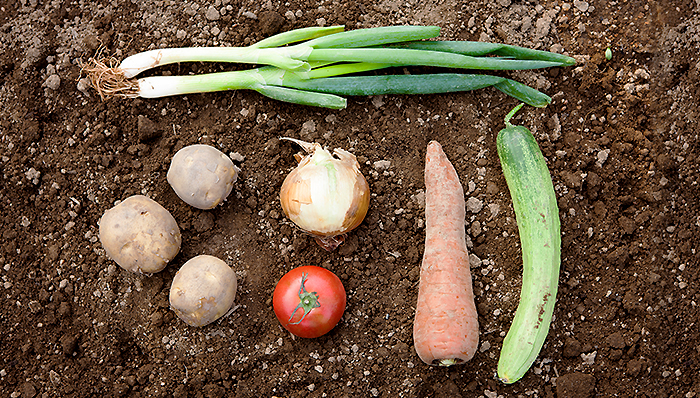 Because Korea is surrounded by sea on three sides, various fish and clams are used in cooking. There are white-flesh fish such as sea bream, flatfish, yellow corvina, and red-flesh fish such as mackerel, as well as abalone, mussels, squid, short necked clams, oysters, blue crab among others. They can be braised, simmered in soy sauce, grilled, steamed or cooked in soups.

Various seaweeds such as laver, brown seaweed, tot (brown algae), and sea lettuce are used in soups, fried foods, and salads. Seaweed is a notable health food that is rich in minerals and low in calories.

In Korea, various meat dishes have been developed, such as grilled and braised meats, as well as dried meat from poultry and livestock. Beef can have different textures and flavors according to its age, sex, amount of physical exercise, cut, and the level of fermentation. A suitable meat should be selected for each particular recipe. Tenderloin and sirloin are good for grilling and frying. Brisket, shank, gristle, tail and chuck short ribs are the best for soups and braising. Top round, shank and ribs are good for steaming and braising. Top round is the best cut for serving raw, dried or braised in soy sauce. Pork is often used for grilling because pork is more tender than beef, and has different fat distributions according to the cut. Chicken is often used in grilling, frying, steaming and soup because the meat is leaner.

Chicken eggs and quail eggs are often pan-fried or steamed. They are also used for coating fish or vegetables before frying. They may be fried for yellow or white egg garnishes.

Fresh fruits such as apples, pears, peaches and strawberries may be soaked in wine or vinegar. Persimmons and jujubes may be dried rather than soaked. Hard shell nuts such as chestnuts, walnuts, gingkoes and pine nuts are used as garnish for gangjeong (sweet rice puffs), steamed foods, gujeol-pan (platter of nine delicacies), sinseollo (royal hot pot) and tea.

Seasonings enhance taste and flavor, and extend the storage life of foods. Yangnyeom, Korean for seasoning, literally means “consider medicine.” The flavor of Korean food very much depends upon the selection and quantity of seasonings. There are various seasonings for saltiness, sweetness, sourness, spiciness and for additional flavors and colors.

Salt is the most common source of the salty taste in food. It is classified as horyeom, jaeyeom, and table salt according to the size of the crystals. Horyeom is coarse bay salt used when making kimchi, bean sauce or bean paste and marinated fish. Jaeyeom is a finer salt also called kkotsogeum (flower salt). It is white and clean, and used as an ordinary salt for seasoning food. Table salt is the finest salt, used for seasoning food at the table.

The word for soy sauce in Korean, ganjang, means “salty.” Soy sauce is made of fermented beans and is used for seasoning food. It adds saltiness, a savory taste and coloring. Soy sauce is used differently depending on the cooking method. Soup, jjigae (stew) and namul are seasoned with gukganjang (concentrated soy sauce, 24% salinity). Jinganjang (less salty soy sauce, 16% salinity) is good for braising, slicing and simmering food and also for meats. Seasoned soy sauce or vinegar soy sauce may accompany fried fish and other fried food.

The volatile compound called “allicin” in garlic gives it its spicy taste, and eliminates the strong odors from fat, fish and vegetables. Garlic is also an important seasoning for kimchi. Minced garlic is used for seasoning. Garlic is usually sliced or shredded for flavoring or garnishing, although whole cloves may also be served.

Ginger has a unique flavor and spicy taste which eliminates the strong odors from fish and the fat in pork and chicken, and enhances the taste of food. It is minced, sliced, shred or juiced for seasoning.

The mustard seeds in mustard contain the enzyme myrosinase, which produces a unique flavor and spicy taste when fermented with water at about 40℃. A mustard sauce with salt, sugar and vinegar is used to dress salads such as gyeojachae (assorted meats and vegetables with mustard sauce) or naengchae (chilled salad).

Cinnamon has a unique flavor that enhances the taste of food. Powdered cinnamon eliminates the strong odors from fatty food. Cinnamon provides a special spice and color in cinnamon punch, rice cakes and Korean cookies.

Varieties of edible oil include sesame oil, perilla (wild sesame) oil and soybean oil. Sesame oil and perilla oil have a unique flavor that stimulates the appetite. They add a nutty aroma to food and prevent moisture evaporation when grilling meat or fish.

Sesame salt is made by washing sesame seeds and stir-frying and grinding them with a small amount of salt while hot. This process produces a sweet taste and flavor. It is used to season namul and steamed or braised food.

When sugar, starch syrup, honey or glutinous starch syrup are added, they provide sweetness and color to the food. They also make the food soft and glutinous by keeping it moist for a long time. Therefore, they are used for seasoning food, and used in making Korean cookies, such as gangjeong, junggwa (fruit- or flower-shaped honey cookie), and yumilgwa (deep-fried cookie of flour and honey).

Vinegar is made by fermenting grains or fruit and it adds tartness to food. As a seasoning, vinegar gives a clear and cool taste to the food, stimulates the appetite and aids with digestion. It also eliminates the strong odors from fish, makes fish fillets firmer, and acts as an antiseptic.

Ground Chinese pepper eliminates the strong odors from fish and fats in fish or meat soups, and it also breaks down the fats.

Salt-fermented seafood has been marinated with salt and fermented. It is an important side dish since it has a lot of protein. It harmonized salty, sweet and savory flavors beautifully when making kimchi or served as a side dish on the dining table.