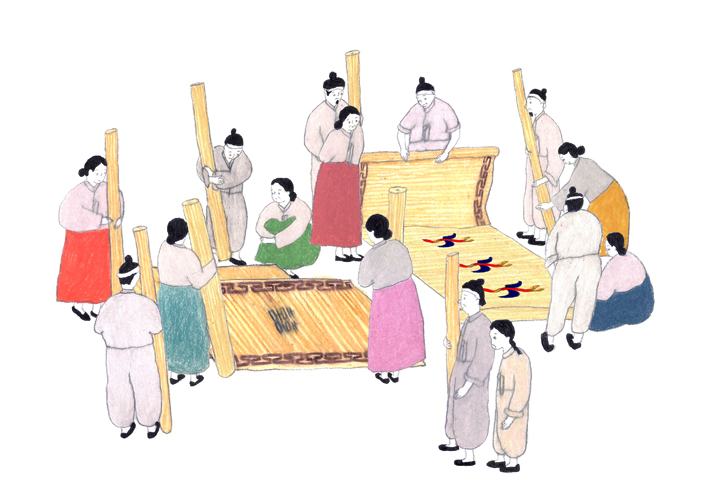 “Gaettong, wake up if you want to come with me.”
Gaettong wakes up rubbing his eyes and follows his dad to Ganghwa folk flea market. Today is market day. “Wow, there are many people here, dad.”

On market day on Ganghwado Island, men and women come to the market carrying hwamunseok mats on their heads. Soon, the market becomes crowded with people holding rolled mats. Since there are so many people who want to buy hwamunseok mats, the folk flea market opens early in the morning. Merchants who want to purchase good quality hwamunseok mats arrive on Ganghwado Island one day earlier and so they can visit the market at dawn the next day.
A hwamunseok mat is made by peeling, dyeing, and weaving sedge straws. Hwamunseok mats are popular as they block the heat and absorb sweat. The origin of the hwamunseok mat is not known, but history says hwamunseok mats were exported to Islamic countries during the Goryeo Era (918-1392). In particular, this local specialty item became more popular, and prices rose after the royal family used them during the Goryeo Dynasty. Locals of Ganghwado Island used to say things like, “You will become rich if you have three daughters,” or “Earn money for one year and then you don’t have to work for three years.” 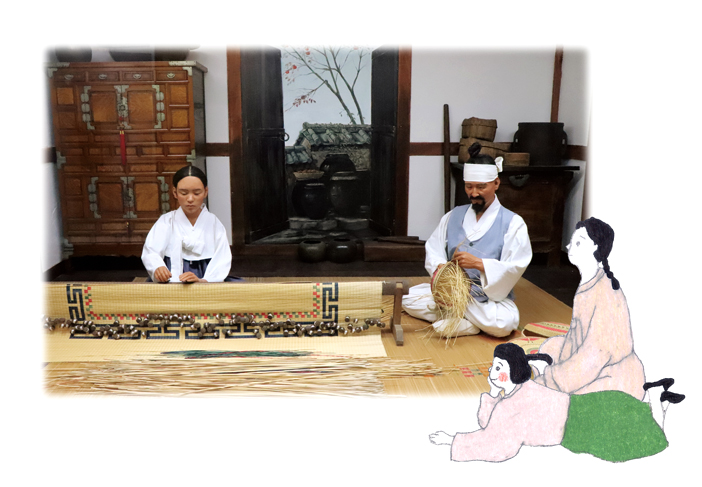 The Hwamunseok mats that Gaettong’s mother made sold at high prices. Gaettong became excited and looked around the market while holding his dad’s hand. There were heaps of wormwood at one corner of the market. Ganghwado Island is known for a local wormwood called lion foot-shaped wormwood (sajabalssuk) and for capillary wormwood . Also, six-clove garlic is another local specialty, and people of Ganghwado Island hang them at the end of the house eaves to conserve them. Ganghwa turnip is a local plant of Ganghwado Island. The roots have a purple top and boasts a unique taste. Furthermore, Ganghwa ginseng was also available at the market. People brought Goryeo ginseng to Ganghwado Island and grew it on the island, which later became known as Ganghwa ginseng. This ginseng is quite popular among foreigners as it is good for one’s health and beauty. The market also sells salted shrimp as well as dishes made with large-eyed herring and eel. The Ganghwa folk flea market opens every five days (the 2nd, 7th, 12th, 17th, 22nd, 27th day of the month), and Dongnakcheon Stream divides the market into the upper and lower markets. When the market opens, people of Ganghwado Island bring out foods and handicraft items they carefully grew and made. Besides, itinerant vendors flock into the market as well.
Gaettong’s dad meets his friend from a neighboring village and chat over unrefined rice wine. Gaettong eats red bean porridge. Then he hears a loud noise from across Dongnakcheon Stream. A folk music band was performing loudly. Gaettong begged his father, so his father gave him some money and allowed him to go there. Gaettong wished everyday was market day.